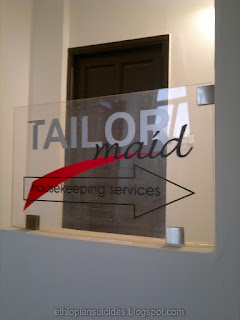 A road map for replacing ‘kafala’ system for migrant workers 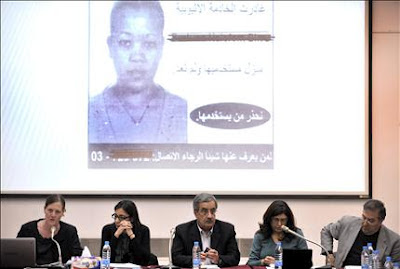 
The Daily Star on February 25, 2012 - BEIRUT: A draft proposal to replace the sponsorship system for migrant domestic workers in Lebanon was introduced by the rights organization KAFA (enough) Violence & Exploitation Friday, with outgoing Labor Minister Charbel Nahhas giving his full support to the initiative.
The comprehensive policy paper outlines the main problems arising from the sponsorship, or “kafala,” system, and suggests recommendations

A Sri Lankan domestic worker killed her employer, a 70 year old woman in Bourj Brajneh today. She was arrested by the prosecutor's office. (National News Agency)

In the negotiations period leading to the formation of the current government, my PhD supervisor confided that he had been "offered" by Nabih Berri the post of the Ministry of Labor, but that he had refused it. In the words of my supervisor, "there's nothing you can do in this ministry. I don't want it.". I got upset and thought I just missed my chance to become the adviser on migrant domestic work to the ministry of Labor.

Charbel Nahas proved that my dear professor was wrong. There's a lot you can do and that needs to be done in the Ministry of Labor. But if your try hard, you are bound to collide with political feudal "higher" interests.

I believe that reform of domestic worker was one of those areas where Charbel Nahas, in order to secure the rights and dignity of local and foreign domestic worker, had threatened the economic interest of many who profit on the kafala sponsorship system. But it was the "controversial" decree governing the transportation allowance that was the last straw.

For the Lebanese corrupt governance system, Charbel Nahas is a virus that has to be ejected out.

Now that Charbel Nahas has submitted his resignation (to Aoun, head of reform block; it seems that it has not been submitted to the council of ministers and therefor not in effect yet), I can only hope that his possible successor pursues the reform of domestic work in Lebanon as envisioned by Nahas.

BEIRUT: A twenty-eight-year-old Sri Lankan woman committed suicide in the Jdeideh area in the Metn region.

An autopsy report by a medical examiner revealed the body had not been subjected to violence.

Police had earlier filed a report on the death, indicating that the woman used a blanket to hang herself in the janitor's room in the Santa Maria building.

BEIRUT: Last week, an Ethiopian domestic worker named Paltishi Hendor was found hanging by women’s socks in her employer’s house in Ghazir, Kesrouan. Last month, the U.K.’s Guardian newspaper reported on Lila Aacharya, a Nepalese woman who was trafficked into Lebanon and found dangling out of a balcony window near Beirut.

And in January alone, three Nepalese domestic workers committed suicide, according to a source at the Nepalese Consulate.

Despite their terrible frequency, the details of these deaths often remain unreported – except in Aacharya’s case, whose ordeal caused a

She had long been dreaming of leading a decent life.
In May last year she flew to Lebanon to take up the job of a maidservant as a way of making her dreams come true.
But within a few days on the job, 22-year-old Hasina Begum's dreams turned into nightmares.
Her employer, a young lonely Lebanese landlord, demanded from her


A December 2011 report on New TV (Aljadeed) on migrant domestic workers in Lebanon.

The Daily Star on February 06, 2012, by Stephen Dockery
With additional reporting by Dana Khraiche

In a recent skit on the station’s comedy program ‘Ktir Salbe,’ a couple asks an agent for a new maid with qualifications such as “servant,”

BEIRUT: A memorandum of understanding and accompanying protocol signed between Lebanon and the Philippines doesn’t provide a solution to the problems facing migrant domestic workers in the country, a Human Rights Watch official said Friday.

“It’s a band-aid for one specific

Activists to MTV: Racism is not funny

“I can’t think of anything lower than this. I don’t know where we are going,” said Farah Salka, who works with the Anti-Racist Movement in Lebanon, in response to the Ktir Salbe video. “The main problem is that people don’t see these workers as human beings, and this is the best example: they’re making fun of them dying.”

“There is a very thin line between being stupid and being funny and MTV just doesn’t get the difference,” said Wissam al-Saliby from the Ethiopian Suicides blog. “And

BEIRUT—Labor Secretary Rosalinda Baldoz on Wednesday signed two agreements here to protect the rights of overseas Filipino workers in Lebanon and pave the way for the lifting of the total deployment ban on OFWs coming to the country.
Baldoz said the agreements she signed with Lebanese Labor Minister Charbel Nahhas would also lead to a Department of Foreign Affairs

Several media sources reported today that the body of Ethiopian domestic worker Paltishi Hendor, born in 1989, was found in the home of her employer, Rami Abou Khalil in Gazir, Keserouan (Maroun Seba building, 3rd floor). She was hanging from her neck in women's socks. Jounieh police is investigating.

Labor minister Charbel Nahas signed with his Filipino counterpart Rosalinda Paldoz a memorandum of understanding and a protocol regulating the arrival and employment of Filipino domestic workers in Lebanon.
الجمهورية، الأربعاء 01 شباط 2012