Taking the streets on May 1st for Migrant Workers! 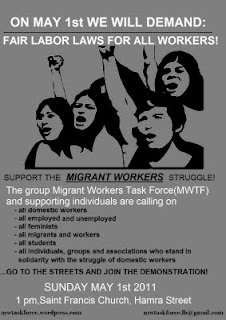 MWTF (Migrant Workers Task Force), ARM (Anti Racism Movement) and other individuals invite everyone to join us for a demonstration on labor day in the form of a march from Hamra to Sanayeh to support the migrant domestic workers' struggle.

Probe on reported death of Pinoy in Lebanon sought

MANILA, Philippines – A migrant workers' rights group has called on the Philippine government to investigate the reported death of a Filipino domestic helper in Lebanon.

Migrante-Middle East said local news in Lebanon reported that a certain Marites Penno was found dead on the balcony of her employer’s house in Hasbaya, South of Lebanon. [http://ethiopiansuicides.blogspot.com/2011/04/filipino-suicide-by-hanging-in-hasbaya.html]

She reportedly committed suicide by hanging, the group claimed.

According to the report, Lebanese authorities and a doctor have already conducted an investigation and examination of her remains and at the house


Scope of Diplomatic Immunity Challenged in Lawsuit Against Lebanese Ambassador

The attorney for a former housekeeper to the Lebanese ambassador to the United States is challenging the scope of diplomatic immunity laws, arguing that domestic work is outside of commercial activities relating to diplomatic responsibilities that are protected against litigation.
The Lebanese ambassador, Antoine Chedid, is facing a lawsuit (PDF) in U.S. District Court for the District of Columbia brought by his family's former housekeeper, Aracli Montuya, who claims the Chedid family failed to pay minimum wage and verbally abused and mistreated her. Montuya worked in the ambassador’s residence from August 2007 to September 2009.
Chedid, represented by Mary Gately of Washington’s DLA Piper, has argued in a motion to dismiss (PDF) that he and his family are immune from such litigation by the Vienna Convention on Diplomatic Relations, which provides immunity against criminal, civil and administrative litigation for diplomats and their families.
In a status hearing today before U.S. District Judge James Boasberg, who recently took over the case in late March from U.S. District Judge Richard Roberts, Montuya’s attorney, Silver Spring, Md.-based solo practitioner Laurence Johnson, said he planned

The National News Agency reported today that an Ethiopian migrant, Mibrat Kebtima, died in hospital in Dora, North of Beirut, after being stabbed in her neck several times with a knife. The Jdeideh police has opened an investigation into the incident.

Filipino "suicide" by hanging in Hasbaya

The National News Agency reported today the death by hanging of Filipino domestic worker Maritis Penno on the balcony of her employer's house in Hasbaya, South Lebanon. Internal Security Forces, criminal investigators, and a doctor, Ahmad Daher, examined the body and the house, and concluded that the worker committed suicide by hanging. An investigation was opened into the incident. 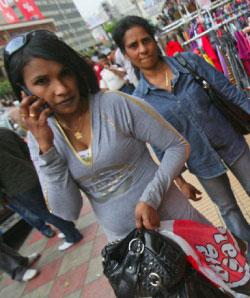 Nepalese perfornance in Hamra, Beirut, during a fundraiser for the Nepalese New Year

During a fundraising party on 16 April 2011 at T-marbouta, Hamra, Beirut, in support of the Non-Resident Nepali Association's 17th April celebration for Nepalese New Year. Organized by the Migrant Worker task Force. Mostly attended by Lebanese, and the Nepalese food was good!!
at Monday, April 18, 2011 No comments:

Amel Association is seeking a program coordinator, based at Amel headquarters, located in Beirut on a full time basis, to be in charge of implementing a project aiming at enhancing the protection of Migrant Domestic Workers (MDWs). This regional project is implemented in partnership with local NGOs in Egypt and Jordan and funded by EC. Deadline: 2011-04-17
For more information: http://www.lebanon-support.org/index.php?page=vacancies&id=1826&action=Detail
at Wednesday, April 13, 2011 No comments:

The Guardian Video Documentary: Nepali slaves in the Middle East

Pete Pattison investigates the trafficking of people escaping poverty and conflict in Nepal. Unscrupulous agents take huge sums of money from them for work abroad then consign them to slavery and appalling conditions in the Middle East. Many are abused by their employers and some are killed at the hands of agents.
The video starts with the images of the body of a Nepalese repatriated from... LEBANON.
Tuesday 12 April 2011. Link to the video: http://www.guardian.co.uk/world/video/2011/apr/12/nepali-slaves-united-arab-emirates-video

Sale of Baskets Made by Jailed Migrant Workers Tomorrow

These baskets are produced by women in the Tripoli jail. There are about 120 women, sharing a number of cells, who worked as migrant domestic workers before they were arrested and put in jail. Some of them may be convicted of some simple crimes, some of them were detained for running away from their workplace. Due to the kafala (sponsorship) system they are obliged to remain with their employers, even if they are unhappy with working conditions. If they run away from their sponsors, they automatically become illegal. These women often think they would be helped by the police, however, they do not realize that running away from their employers is a legal offense. These women do not know their rights and legal obligations. When they land in jail, these women do not know how long they have to stay in jail and often don’t understand why they were arrested.

Making baskets is creative and therapeutic. Selling them for money also gives them some financial freedom. When they are eventually released and sent home, hopefully this little money will come in handy. When they are hauled into prisons,

Coalition in Lebanon wants to arm maids with guns

Now Lebanon reports on a recent attempt to arm maids with guns in Lebanon.
at Sunday, April 03, 2011 2 comments: