In the context of the Syrian war, Lebanon has emerged a benevolent neighbor willing to open its borders, homes and schools to refugees. But migrant domestic workers say there is another, harder side to the host nation. Many migrant domestic workers in Lebanon are subjected to unfair and even abusive conditions
Home to some 200,000 migrant domestic workers, Lebanon is the caretaker of the fragile dreams of women from across Africa and Asia. In uprooting their lives and making the journey from countries such as Ethiopia, the Philippines and Sri Lanka to the southern shores of the Mediterranean, they hope to earn enough money to help ease the burden of poverty on their families back home.
Not always, but all too often, they find themselves enduring a different kind of burden as victims of a system that facilitates exploitation and abuse.
The Kafala system - which is also in place in a number of Gulf states - requires domestic migrant workers to have a sponsor in the country of their destination. This is usually the prospective employer, who has to pay visa and flight costs and possibly an agency fee. It is an outlay that runs beyond the thousand dollar mark, and which assistant coordinator of the Migrant Community Center in Beirut, Rahel Abebe, says leads to a misplaced sense of ownership.
"Because they bring a woman in from another country - such as Ethiopia - they think they have bought her. They don’t understand they are paying for the process, they think they are paying for her."
"Set of abuses" Some 200,000 migrant domestic workers are employed by Lebanese families
And that mindset leads to abuse which Human Rights Watch women’s researcher for the MENA region, Rothna Begum, says ranges from unpaid wages, confiscated passports, exhaustive working hours and no holiday or days off, to confinement, death threats, verbal, physical, and sexual abuse. And there is no legislation for them to turn to.
"Most migrant workers fall within the Kafala system, yet they receive the least protection under labor laws," she told DW.
In the case of domestic workers, who live where they work and may consequently be expected to be on call 24 hours a day, the lack of a legal framework can lead them to take potentially fatal action.
"There are cases of women who end up risking their lives by climbing out of buildings in which they have been confined," Begum continued. Those who succeed are deemed to have absconded, a status that brings with it another set of problems. "In a system which is designed to make workers complete their contracts, they cannot just leave and find another employer."
Although there are some small groups and NGOs on hand to help women who escape abusive employers, Ethiopian Rahel Abebe, herself a former domestic servant, says most workers are unaware of their existence. "If they run away, it takes them months to find an organization, so they live with friends or just somehow."
"Second class entities"
Lina Khatib, Director of the Carnegie Middle East Center in Beirut, believes the basic problem in Lebanon is that migrant domestic workers are not regarded as equal human beings but as "second class entities" without full social and human and economic rights. And she attributes this to an inherent sense of racism and superiority toward domestic work that harks back to the days of feudalism and Ottoman rule. 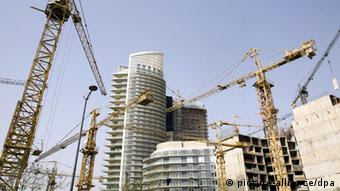 Construction is booming in Lebanon, and many new flats are built with a servant in mind
"It is a widespread problem that is shared across social strata, and it has become socially acceptable for migrant workers to be living the way they do."
Citing the new builds that are going up across the country as part of the booming real estate scene, Khatib says it is now standard practice to incorporate a dedicated "servant’s room" into modern apartments.
"Very often no bigger than 2.5 by 2m, they have no windows and they resemble prison cells, which shows that the livelihood of migrant workers is regarded as inferior."
Tackling the problem
Workers themselves and human rights groups agree that the only secure way out of the trap is via legislation, but in a country currently characterized by political paralysis and tensions that have spilled over from neighboring Syria, improving the lot of domestic servants is not at the top of the agenda. On the contrary, says Khatib, highlighting the influx of Syrians as a potential problem.
"There is a degree of resentment from certain sectors of the Lebanese population regarding the position of Syrian workers, so there is debate in some political circles to reduce their rights, which would have an indirect negative impact on migrant workers." The influx of Syrian refugees is putting a strain on neighboring Lebanon
Until the government can muster the political will necessary to draft and pass labor laws to protect the most vulnerable, it falls to civil society to continue campaigning for an end to the Kafala system that destroys dreams brought to the country in the battered cases of young girls.
"I don’t know why, but they want to use us for slavery," Rahel Abebe said. "This is more than slavery, this is how it is. It is very shameful."
at Sunday, June 01, 2014