Lebanese voters go voting with the support of their maids

In the following article in yesterday's Daily Star on Municipal Elections:


Many residents could be seen queuing before polling stations opened at 7am. Some showed up with babies on shoulders or migrant domestic workers in tow, while others turned out after being delivered to vote in ambulances. 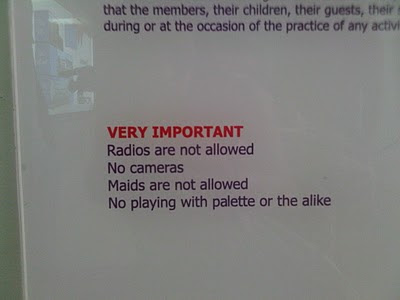 This is a photo of an announcement on a Lebanese beach/swimming facility. "Maids", in the Lebanese mind, means migrant domestic workers. So no doubt about it, we are witnessing another manifestation of Lebanese racism and discrimination against MDWs

In the Lebanese mind, mixing "inferior race" (i.e. not white people) and "inferior" work (based on the Lebanese mind scaling system as there is no such thing as 'inferior' work) objectifies people and makes the fall within the category of radios, cameras, palettes or the alike.

(Note: if you go to the beach this summer, please send me photos of similar material, if you find any, to my email was717 at gmail dot com, with information on the location of the photo)
at Wednesday, May 26, 2010 No comments:

Email ThisBlogThis!Share to TwitterShare to FacebookShare to Pinterest
Labels: discrimination, the Lebanese mind

Caritas Sri Lanka releases two guidebooks and a docudrama for Sri Lankans working abroad. The Catholic charity calls on the government to better protect Sri Lankans going abroad in search of work. It points out that, in some cases, wages are not even paid.

"Madam is happy because mister won presidency of the municipality" said one of the maids interviewed for Al-Akhbar's article on the interest of some migrant domestic workers in the ongoing Lebanese municipal elections. 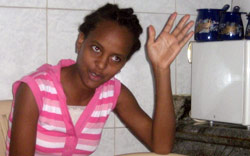 The discussion was really intense, at some points, despite the relatively low turn out. It was held on Monday, May 10th, at 7 p.m. at Chords Restaurant (Hamra), as part by Nahwa El Muwatinia's Na-am Lil Hiwar (Yes for Dialog) project.

The legal framework and legal shortcomings were thoroughly exposed by Nadim Houry and Kathleen Hamil. Nadim is senior Human Rights Watch researcher for Lebanon and Syria.

Aimée from Madagscared shared with us her personal experience of coming to Lebanon as a migrant domestic worker, her first employment and employer, and her current role as a community leader and her support for Malagasy and other nationalities working as maids in Lebanese homes.

The attendees also had valuable input as noted in this Daily Star article.

Report: Migrant domestic workers continued to be maltreated in 2009

Findings of the 2009 progress report on the European Neighborhood Policy, an initiative by the Delegation of the European Union aimed at promoting reform in Lebanon, concluded that there was “a lack of progress” across a range of pressing issues. (The Daily Star)

These issues include foreign maids. The report said that migrant domestic workers continued to be maltreated in 2009. The exact wording of the report which can be found here is:

In January 2009 a decree for the regulation of employment agencies that bring women migrant domestic workers to Lebanon was adopted. A Unified Contract for Migrant Domestic Workers was prepared in February 2009. However, enforcement remains critically weak as cases of exploitation, mistreatment and high rates of unnatural fatalities among women domestic migrant workers continue to be reported.

Email ThisBlogThis!Share to TwitterShare to FacebookShare to Pinterest
Labels: research

BEIRUT: Awareness about the plight of migrant domestic workers has grown but activists are still having trouble arousing the interest of the general public on the issue.

Hoping to attract wider involvement, non-governmental organization Nahwa al-Muwatiniya on Monday held a public discussion on the rights of migrants.

Al-Akhbar newspaper reported today that Bengali migrant worker, Rina Boyati, aged 37, was found dead in a parking lot in Doha Aramoun (Mount Lebanon). Al-Akhbar added that the reports did not indicate any wounds or bruises on her body and that the cause of death was unknown.

Public discussion this Monday: ‎Should Domestic Workers be Entitled to a Day Off?

This Monday, May 10th, at 7 p.m. at ‎Chords Restaurant (Makhoul St., Hamra‎), Nahwa El Muwatinia's Hiwar (Dialog) Session will be on the rights of migrant domestic workers.

Speakers include:
See you there!! 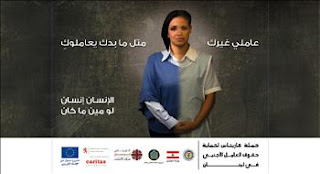 SIN AL-FIL: Employers must respect the rights of migrant domestic workers, Labor Minister Boutros Harb said Tuesday.
Speaking at the launch of a campaign to raise awareness about the plight of migrant workers, Harb said his ministry was “committed” to human rights for all, “irrespective of their gender, color or race.” The campaign, being carried out by Caritas Lebanon Migrant Center, will see a nationwide media campaign advocating equal rights between Lebanese and migrant workers.
Some 200,000 female migrant domestic workers live in Lebanon, mainly from Ethiopia, Sri Lanka and the Philippines.

Email ThisBlogThis!Share to TwitterShare to FacebookShare to Pinterest
Labels: caritas

Al-Akhbar newspaper reported today the death of Ethiopian maid Wilana Sbsay, who "fell" from the balcony of her employers in Antelias, north of Beirut. According to reports, she threw herself from the balcony.

Caritas Migrant Center is launching a new campaign for the protection of migrant rights in Lebanon, according to a National News Agency brief.

The following is The Daily Star article on Labor Day march and protests for the rights of domestic workers. There's little coverage unfortunately in other newspapers because of Sunday's municipal elections. For more campaign coverage: http://twenty-four-7.org/

BEIRUT: Dozens of protesters gathered in Ain al-Mreisseh Square on Saturday to demonstrate against the poor treatment of migrant workers in Lebanon, one of a number of events taking place across the city to mark Labor Day.

“We want all workers to know they are not alone, and there are many people who want to help” said Theresa, a domestic worker from the Philippines taking part in the demonstration.

Protesters marched from Qarantina Bridge to Ain al-Mreisseh square carrying placards and shouting slogans before an outdoor concert was held on the Corniche. Those taking part were a mix of students, migrant workers and sympathetic citizens. An Asian and African food festival was held earlier in the day in an effort to encourage cultural exchange.