The Government of Liberia through the Ministry of Foreign Affairs says it is concerned about the welfare of seven Liberian girls that were allegedly trafficked to the Republic of Lebanon and that all frantic efforts are being made to get the girls returned to Liberia soon.

The Liberian girls were taken to Lebanon at different intervals with the promise that they would be given jobs and allowed to go to school in Lebanon.

Contrary to the promise of the Lebanese nationals who facilitated their travel to Lebanon, the girls were given abnormal jobs and subjected to inhumane treatment.

A source told this paper that when some of the girls got sick in Lebanon they were never taken to the hospital; instead they were only given pills or sometimes left along.

Our source alleged that some of the girls were assaulted and sexually abused.
(...)

Narrating their ordeal to FPA a few months ago, one of the women Muffittee Panma explained that they were promised better living conditions and jobs by a Lebanese merchant in Liberia.

“We were told by a Lebanese businessman, Abbas Debs, owner of the Speedo Printing press in Monrovia, that we were going to Lebanon to do business because his brother had a big business that needed workers, but when we arrived different people who had paid US$3,500 for each girl, came for us at the Airport to work as house-girls and be used anyhow in their homes” said Muffittee.

The women include: Bernice Gbar, 25: Came to Lebanon Nov.5, 2011; worked 2 years and 8 months (salary-75 per month) without pay, was beaten and abused sexually - from Grand Bassa County.

Grace David, 25, from Nimba County; Came to Lebanon and worked from Nov.15, 2012 to August 2014 without salary 250 promised and was badly beaten and was helped by the Liberian Community in Lebanon.

Rema Nyepan, 25, from Maryland County; arrived in Beirut August 17, 2013. Worked 1 year and 5 months without salary 250 that was promised her, she was beaten in the eyes when she asked for the salary.

Ayres Jasper, 21, Maryland County; Came to Lebanon Jan.17, 2013. She worked for one year and seven months without a salary (250). Boss abused her sexually with videotaping activities. 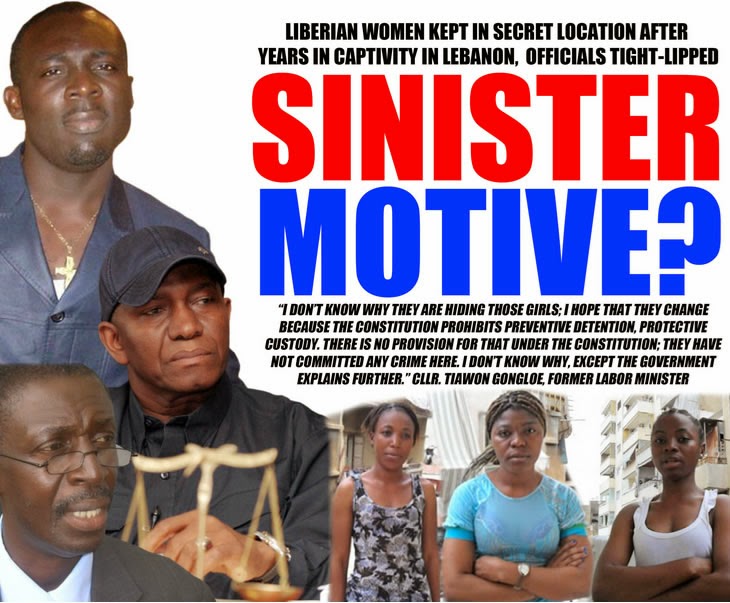