The body of a Bengali women was found in Tripoli. No further information was given in the National News Agency brief today.

Don't Let Her Commit Your Crime
Migrant Rights
Kafa is a local NGO operating from Lebanon, a country where a 2008 HRW report stated that the average death toll for domestic workers in Lebanon is one per ...

The Real Maids of Beirut « AFRICA IS A COUNTRY
By dmosh
If you've followed the news from the Lebanon over the last few years, you've read quite a bit about the difficult to desperate situation of domestic workers. Maids, child care providers, housekeepers face unrelenting abuse. They are assaulted ...

The Experiences of an Ethiopian Migrant Worker and Filmmaker in ...
Beirut is a drama about a group of Ethiopian girls in Lebanon working as domestic workers. It is loosely based on the Ethiopian girls that I have encountered ...
at Saturday, September 24, 2011 No comments:

The Plight of Ethiopian Women in the Middle East: Q & A With Rahel Zegeye

New York (TADIAS) – Widespread news coverage of an Ethiopian migrant worker in Libya, Shweyga Mullah, who had cared for two of Moammar Gadhafi’s grandchildren and suffered abuse and severe burns, has elicited heated reactions from Ethiopians worldwide. Her story brings to the forefront the plight of thousands of female Ethiopian migrant workers who continue to work under dangerous conditions in various countries in the Middle East.
“My heart is burning,” said Rahel Zegeye, who left Ethiopia when she was 20 years old to work as a maid in Lebanon. She still works and resides there. “The Ethiopian government should press charges against the madam (Aline Skaf-Hannibal). I would like to see equal treatment of the case no matter who committed the crime.”
Rahel is also the Director of a new film called Beirut, which documents Ethiopian domestic workers in Lebanon.
We recently interviewed Rahel Zegeye about her movie and the living conditions of Ethiopian women in the Arab world.

TADIAS: Thank you Rahel for your time. Please tell us a bit about yourself. Where you were born, grew up, and when did you move to Lebanon and why?
Rahel Zegeye: I was born in Addis Ababa as the middle child of nine siblings. At school I took acting and film classes. When I was 20 years old I left Addis for Lebanon in order to work as a maid to earn money and help support my family back home. My father was a soldier and retired early. Since I was very young my dad has always been unemployed which was the main reason why I left to work...

For the full interview: http://www.tadias.com/09/13/2011/the-plight-of-ethiopian-women-in-the-middle-east-q-a-with-filmmaker-rahel-zegeye/
at Saturday, September 24, 2011 No comments:

Email ThisBlogThis!Share to TwitterShare to FacebookShare to Pinterest
Labels: ethiopian

Advocacy video by Kafa association: "Don't push her to commit your crime"

Campaign slogan: "Don't push her to commit your crime" The image below as put on billboards on streets.

PS: I view that almost all media campaigns over the past 3 years have proven to have close to zero impact.
at Saturday, September 24, 2011 No comments:

The Daily Star: Migrant workers to get warmer welcome 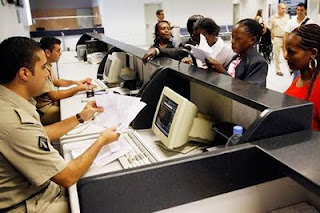 BEIRUT: Migrant workers will now receive information packs on their rights and responsibilities upon arrival in Beirut, and airport staff will undergo training on how to recognize vulnerable people, General Security announced Thursday.

Staff at Beirut Rafik Hariri International Airport will attend workshops, held by the nongovernmental organization Caritas, on migrant rights, how best to deal with migrant workers when they arrive in Lebanon and how to get them the relevant help if they appear to need it.

Dima Haddad, project manager at Caritas Migrants Center, said staff will be instructed on how to notice certain behavior. “Airport staff will receive training on how to detect vulnerable people, anyone who might have been trafficked, for example,” Haddad said.

The designated areas for migrant workers, upon arrival at the airport, have also been redecorated, in an effort to create a more welcoming atmosphere.

The nongovernmental organization KAFA: Enough Violence and Exploitation has launched a media campaign to raise awareness of the often dangerous conditions which foreign domestic workers endure in Lebanon and to urge authorities to implement the relevant legislation needed to protect them.

The stark poster features the image of a hanging noose, and reads: “Don’t push her to commit your crime: toward legal protection for domestic workers in Lebanon.”

In a statement, KAFA laid out some of the rights which domestic workers are often deprived of in Lebanon, including the right to rest, travel and communicate and the right to keep their own private documents, such as passports.

The statement adds that many workers are subjected to violence, sexual abuse and even human trafficking.

Kafa violence against women launched a media campaign with the following headlines "Don't push her to commit your crime" and "towards legal protection of domestic workers in Lebanon". Assafir newspaper.