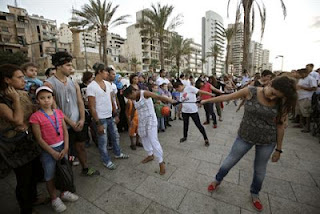 There are 200,000 migrant domestic workers in Lebanon, and the sponsorship system legally ties each of them to their employer,

Earlier this month, Domestic worker dies in a presumed suicide

12 September 2012 - An Ethiopian domestic worker was found dead in the area of Bsaleem in the Metn district after she had fallen off the roof of a building, the National News Agency reported.
The report said preliminary results revealed that the deceased 22-year-old worker, identified as Lomina Arina, committed suicide, adding that her body was transferred to the Asharq al-Awsat Hospital.
A number of domestic workers have been taking their own lives in Lebanon mainly due to acts of abuse committed by their employers.