Migrant Workers in Lebanon: No to Medieval Treatment 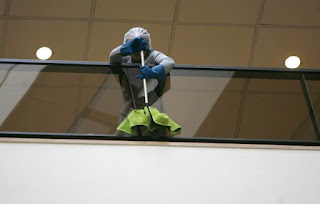 The Migrant Workers’ Parade and Festival, set for Sunday in Beirut, is seeking to “change mentalities” about foreign workers in Lebanon.
African migrant workers continue to be called fahmeh (charcoal) or abed (slave) on Lebanon’ streets. Asians can still be addressed as “Jackie Chan” or “Bruce Lee.” Arab laborers are routinely referred to as mukhabarat (informers) or as “stinkers.”

The racism practiced by part of Lebanese society against migrant workers is medieval. Yet the Lebanese state refuses to enact laws to protect them. For both reasons, an unprecedented demonstration is planned for Sunday April 29.

Lebanon’s Anti-Racism Movement has issued a public invitation for this year’s International Workers’ Day to be used as an occasion to honor the people who raise our children, walk our dogs, guard our homes, and build the huge skyscrapers that tower over our capital. The day is not meant to be for Lebanese workers only, but for everyone who labors to earn their living and make ends meet, the group reasons. So who could be more deserving of the right to celebrate it than female domestic workers, for example?

Hundreds of female domestic workers are victims of racism, xenophobia, and verbal and physical violence.
Sunday’s Migrant Workers Parade & Festival, organized by the Anti-Racism Movement in conjunction with a number of other Lebanese human, women’s, and social rights groups – the anti-exploitation society Kafa, the feminist collective Nasawiya, the Insan Association, and Pastoral Care for African And Asian Migrants – has been planned to celebrate just such people.

The demands they will raise will include the abolition of the slavery-like sponsorship system for foreign workers, but the impact the organizers are hoping the event will have goes far deeper.

Members of the Sri Lankan, Ethiopian, Bengali, Filipino, Sudanese, and Malagasy communities will lead the parade, which will begin in Dora at noon (opposite Makhlouf restaurant) and march to St. Joseph’s Church on Monot Street (Achrafieh). This will be the venue for an afternoon festival featuring music, dance, and food from the participants’ countries. They will raise their national flags, conduct stage performances and displays reflecting their cultures, and present their national cuisines.

The men and women workers will thus be celebrating themselves, and in the process telling Lebanese society that they are not slaves or inferior beings, but people from countries with proud and ancient civilizations and rich cultures and traditions.

The event has gained widespread support among Lebanese intellectuals, academics, and artists who have signed a petition urging people to take part.

The sponsorship system is the single biggest cause of the many injustices they suffer in Lebanon.
The statement-recalled the death in March of Alem Dechasa, the Ethiopian domestic worker who was filmed being savagely assaulted in front of her country’s embassy by a Lebanese man from the employment agency that recruited her. The incident highlighted the fact that “hundreds of female domestic workers are victims of racism, xenophobia, and verbal and physical violence” in Lebanon, the statement said.

The Anti-Racism Movement’s Nadine Moawad told Al-Akhbar she believed that the treatment accorded to Alem Dechasa and her tragic death had “jolted the conscience” of the Lebanese public. She hopes that Sunday’s event will do more to confront racist attitudes by celebrating migrant workers and their cultural heritage.

Moawad said that the sponsorship system, under which migrant workers are tied to a specific employer, is the single biggest cause of the many injustices they suffer in Lebanon.

“But things won’t change merely by changing legal procedures,” she warned. “We need to change mentalities more than anything else.”

This article is an edited translation from the Arabic Edition.
at Saturday, April 28, 2012