At first I thought she was wearing a hat and something over her face. Then the awful realization dawned that her entire scalp and face were covered in red wounds and scabs, a mosaic of injuries that rendered her face into a grotesque patchwork.

Even though the burns were inflicted three months ago, she was clearly still in considerable pain. But she told us her story calmly.

She'd been the nanny to Hannibal's little son and daughter.

The 30-year-old came to Libya from her native Ethiopia a year ago. At first things seemed OK, but then six months into her employment she said she was burned by Aline [Skaff*].

In soft tones, she explained how Aline lost her temper when her daughter wouldn't stop crying and Mullah refused to beat the child.

"She took me to a bathroom. She tied my hands behind my back, and tied my feet. She taped my mouth, and she started pouring the boiling water on my head like this," she said, imitating the vessel of scalding hot water being poured over her head.

* Aline Skaf is a Lebanese actor born in 1980 in Sebaal in Lebanon.

BEIRUT: Lebanon’s Tourism Ministry urged over the weekend all tourism-related establishments to adopt an anti-discrimination policies.

In a circular – number 20 – issued Saturday, Tourism Minister Fadi Abboud urged to all tourism-related venues to cater to all customers without any form of discrimination, whether in terms of race, nationality or those with disabilities, reported the National News Agency.

New Wikileaks cables out: a wealth of information on the situation of domestic workers in Lebanon and the region

When searching for Lebanon related cables in the newly release batch of cables on Wikileaks (http://www.cablegatesearch.net/search.php?q=Lebanon), we can find a lot of information on the situation of domestic workers in Lebanon and the region, in the various US embassy reports written in the countries source of migration.

-- IOM officials cite Yemen as a significant transit point, for young Ethiopian girls (average age 14-15) being trafficked to Djibouti. A recent impact assessment concludes that many of these trafficked girls in Djibouti have HIV/AIDS.

-- There are no reports of trafficking of Ethiopians to the United States. A few years ago, IOM reported that approximately a dozen clients claimed that a smuggler was charging up to 80,000-100,000 birr (USD 9,050- 11,312) to smuggle them into the United States. Since then, there is little to no information available about these routes. Yemen and Lebanon have been identified as some of the most popular destinations for trafficking and smuggling. 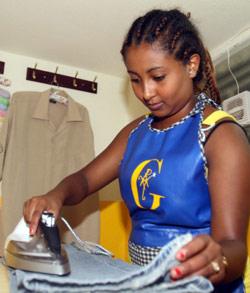 An article about the recent "domestic workers training center".


"Between 2008 and 2010, 15 Nepalese maids working in Lebanon committed suicide," says Sthaneshwar Devkota, executive director at the state-run Foreign Employment Promotion Board. "Being mostly illiterate and unaware, they are easily duped. For instance, though they get free visas, many agencies swindle them."

"The more dangerous ruse is making them go though India. If their documents are not in order or they are being lured to banned destinations like Lebanon, immigration authorities at Kathmandu airport will spot the fraud. So they are made to go to India first. It increases the danger of the women being forced into the flesh trade."

Madagascar's government chartered a plane to evacuate her and 85 other women.

The youngest of her four children, whom she left behind when he was six years old, played a key role in her evacuation, tracking her down via a welfare agency that rescues "slave maids", she says.

Ms Baholiarisoa says she was trapped in "a living hell" after being duped into going to Lebanon.

A recruiting agency had promised her a nursing job for three years, with a salary of $800 (£486) a month.

Ms Baholiarisoa says she thought it would give her a chance to save money, which she could send to her children.

Will training maids in Lebanon cut down on abuse? 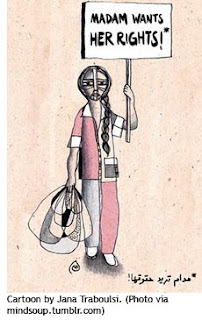 With some 200,000 domestic migrant workers employed in Lebanon, there’s certainly a market for this new concept, the first of its kind in the country: a training center for maids.

“Most people have some kind of problem with their maid but there is one simple solution to this and that is knowledge,” center founder and director Rachid Beydoun told the Daily Star.

At a starting cost of $180, The House Keeper Training Academy teaches maids how to clean and use proper etiquette. The four-day course also offers basic language instruction and provides information on migrant worker rights.

While the new center could be seen as a welcome move to improve conditions for maids in Lebanon, it’s also stirring some controversy.

"I think the heart is in the right place in terms of trying to work on the issue, but

Even more controversial than the rising prices are beach clubs’ policies on domestic workers and nannies.

Domestic workers are generally admitted to resorts under conditions specifying how they dress and behave on the premises.

A handful of resorts also don’t require entrance fees for workers, on the condition that they don’t swim.

At La Guava domestic workers are charged about the same price as children while at Bamboo Bay they are not allowed to swim or sit on the lounge chairs, and at Tabarja’s Aqua Marina 2, they must remain in an area set aside for them alone.

The aftermath of repatriation from Lebanon...

Madagascar to export labour to Jordan

The government of Madagascar will send 3,000 workers to Jordan by the end of the year, a minister has said.

Public Function, Labour and Social Regulations minister Henri Rasamoelina, made the announcement barely four months after the government repatriated some 85 domestic workers who had been subjected to abuse in Lebanon.


Since the repatriation of domestic workers from Lebanon in 2006, the Philippine government formulated the HSW Reform package that gives would-be domestic workers pre-departure training and certification and language and culture training.
The said package also set the minimum age of Filipino domestic workers to be 23 years old; attendance to a comprehensive pre-departure education program (CPDEP); waiving of paying placement fees; and requiring employers to pay US$400 minimum.
(...)